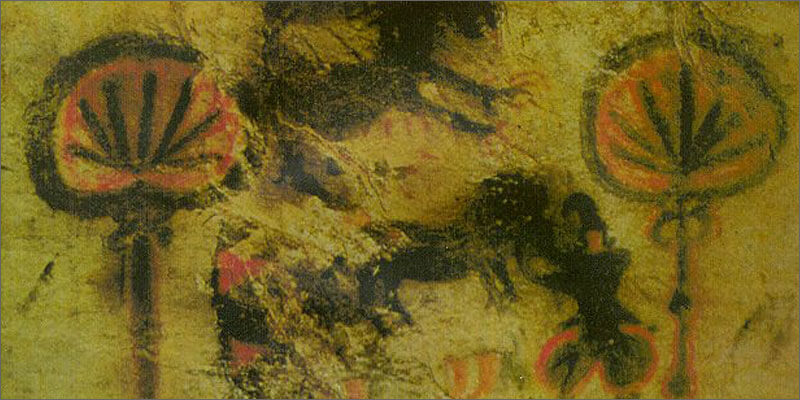 CANNABIS CULTURE – When most people think of the history of cannabis, they generally flash to the “grass” the hippies of the 1960s smoked, or the “reefers” of the Jazz age. However, the fact is, according to current archeological evidence, humanity’s relationship with cannabis goes back tens of thousands of years before even the first words of man were recorded.

The role of cannabis in the ancient world was manifold: with its nutritious seeds, an important food; and its long, pliable strong stalks an important fibre, as well as an early medicine from its leaves and flowers.

Hemp fibre imprints found in pottery shards in Taiwan, just off the coast of mainland China, that were over 10,000 years old and remnants of cloth from  8,000 B.C. have been found at the site of the ancient settlement Catal Hüyük (in Anatolia, in modern day Turkey). Much older tools used for breaking hemp stalk into fibres, indicate humanity has been using cannabis for cloth “since 25,000 B.C. at least” (Barber, 1999).  “In 1997, a hemp rope dating back to 26,900 BC was found in Czechoslovakia. it was the oldest evidence for hemp fiber” (Seydibeyoglu, et. al. 2017). 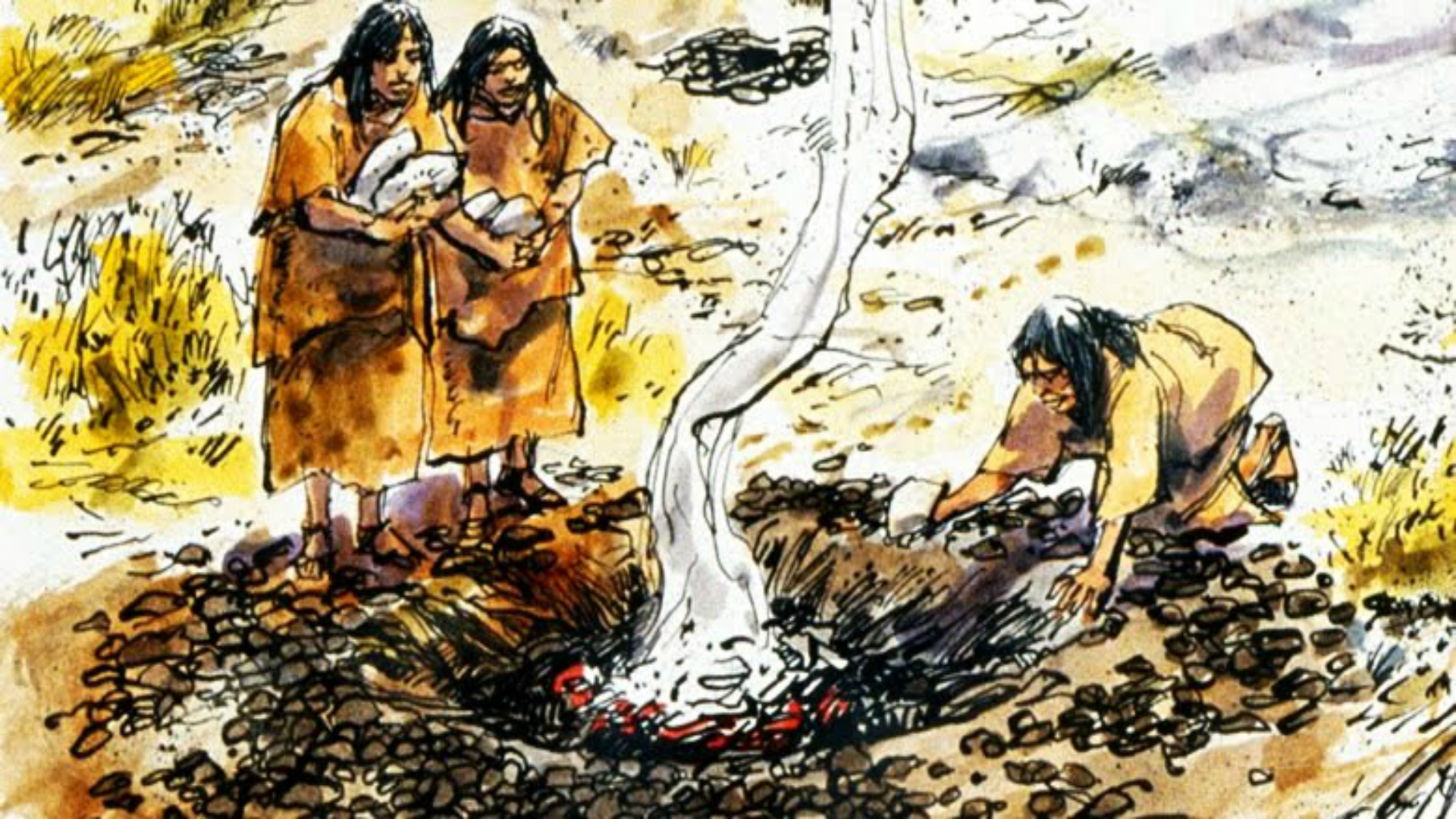 It seems likely that by the time that humanity began weaving the fibres of the plant into cloth, they had already been familiar with it for centuries, if not millennia. The late Professor Richard E. Schultes, of Harvard University, considered the father of modern ethnobotany, believed it was likely in the search for food, that humanity first discovered cannabis and its protein rich seeds:

Early man experimented with all plant materials that he could chew and could not have avoided discovering the properties of cannabis (marijuana), for in his quest for seeds and oil, he certainly ate the sticky tops of the plant.  Upon eating hemp, the euphoric, ecstatic and hallucinatory aspects may have introduced man to the other-worldly plane from which emerged religious beliefs, perhaps even the concept of deity.  The plant became accepted as a special gift of the gods, a sacred medium for communion with the spiritual world and as such it has remained in some cultures to the present. (Schultes, 1973)

There has been interesting scientific speculation that the psychoactive properties of cannabis may have played a role as a catalyst in the time period of advancement that is known as the Great Leap forward, where it may have aided prehistoric man with novel new ways of thought processes, and development in tool making. Doctors John McPartland and Geoffery Guy, in their fascinating paper, The Evolution of Cannabis and Coevolution with the Cannabis Receptor – A Hypothesis, postulate that a plant ligand, such as the cannibinoids of the hemp plant, “may exert sufficient selection pressure to maintain the gene for a receptor in an animal. If the plant ligand improves the fitness of the receptor by serving as a ‘proto-medicine’ or a performance-enhancing substance, the ligand-receptor association could be evolutionarily conserved” (McPartland & Guy, 2004).

A recent scientific study out of the USA led by Washington State University researcher Ed Hagen, has suggested that our prehistoric ancestors may have ingested cannabis as a means of killing of parasites, pointing to a similar practice among the primitive Aka of modern day central Africa. We do know that references to cannabis medicine appear in the world’s oldest pharmacopeias, such as China’s ancient Pen Ts’ao, in ancient Ayurvedic texts, in the medical papyrus of Egypt, in cuneiform medical recipes from Assyria, first on a list of medicinal plants in the Zoroastrian Zend Avesta and elsewhere.

It can be reasonably suggested that soon after agriculture started, if not at its very inception, the cultivation of cannabis began to spread widely, carrying its name and its cult with it. In his study on the botanical history of cannabis and man’s relationship with the plant, Dr. Mark Merlin put forth that “perhaps hemp was one of the original cultivated plants… [of]the progenitors of civilization” (Merlin, 1973). Merlin was not alone in this train of thought. In his The Dragons of Eden: Speculations on the Evolution of Human Intelligence, the late Carl Sagan also speculated that early man may have begun the agricultural age by first planting hemp.  Sagan used the pygmies from southwest Africa to demonstrate his hypothesis; the pygmies had been basically hunters and gatherers until they began planting hemp which they used for religious purposes (Sagan 1977). More recently Entheobotanist Christian Ratsch explained:

No other plant has been with humans as long as hemp.  It is most certainly one of humanity’s oldest cultural objects.  Wherever it was known, it was considered a functional, healing, inebriating, and aphrodisiac plant. Through the centuries, myths have arisen about this mysterious plant and its divine powers.  Entire generations have revered it as sacred…. The power of hemp has been praised in hymns and prayers. (Ratsch 1997)

Based on collected archaeological evidence, we can see that Cannabis has been used for its resinous psychoactive properties for more than 5 thousand years. The late archaeologist Andrew Sherratt of the Ashmolean Museum, University of Oxford, pointed to the use of cannabis incenses at a gravesite of a group known as the Proto-Indo-Europeans, the Kurgans, who occupied what is now Romania 5,500 years ago. The discovery of a smoking-cup which contained remnants of charred hemp seeds at the site documents that at 3,500 years before Christ humanity had already been using cannabis for religious purposes for millennia. (Sherratt, 1995)

In Incense and Poison Ordeals in the Ancient Orient, Alan Godbey felt that in such immolation of psychoactive plants, we may find the Genesis of the concept of “divine plants”:

As to the antiquity and genesis of such practices, it is to be recognized…that they began when the primeval savage discovered that the smoke of his cavern fire sometimes produced queer physiological effects. First reverencing these moods of his fire, he was not long in discovering that they were manifested only when certain weeds or sticks were included in his stock of fuel. After finding out which ones were responsible, he took to praying to these kind gods for more beautiful visions of the unseen world, or for more fervid inspiration… So one group of “animate and divine plants,” … results from the most primitive empiricism, because of purely objective or concrete experiences… (Godbey, 1930)

These same people who were the first to burn cannabis were also the first to domesticate the horse, an act of domestication first accomplished it is believed, with hemp ropes. As Mark Merlin, Professor of Botany at the University of Hawai’i has noted:

The crucial relationship between horse and human rider originated in the Sredni Stog culture which flourished in the Ukraine 6,000 years ago… The origin of horse riding was the first significant innovation in human land transport predating the invention of the wheel, and hemp fibers may have played an important role in this crucial invention of horse riding. (Merlin, 2003)

In the Discover article ‘First to Ride’,(the appropriately named)  William Speed Weed, interviews archaeologist Sandra Olsen, who also makes reference to the utilization of hemp in the domestication of the horse, a pivotal and evolutionary step for ancient man:

“Prior to horseback riding, most people carried all their cargo on their shoulders, or they were restricted to using boats along rivers and coastlines,” says Olsen, an archaeologist at the Carnegie Museum of Natural History in Pittsburgh. “Horses were swift of foot, could easily support one or two human passengers, carry heavy loads, and survive on very poor quality vegetation or fodder. They were our first form of rapid transit.”

“They probably had a simple bridle made of hide or hemp,” she says, “drawing a little schematic of a rope looped around the front teeth of a horse’s skull. They might also have had lassos, whips, tethers, and hobbles of the same material.” (Weed, 2002)

Thus it is a widely held view that it was with their nomadic horse riding descendants, such as the collection of steppe tribes we now know under the collective title as Scythians, that cannabis was first spread around much of the ancient world. Linguistics have left a trace with this, as the first linguistic roots for the term ‘cannabis’, comes from an ancient Proto- Indo-European root word, “kanap”; the “an” from this root left traces in many modern terms for cannabis, such as French “chanvre”, German “hanf”, Indian “bhang”, Persian “bhanga”, Dutch “Canvas”, Greek “Kannabis,” and so on. Through their high mobility, these ancient nomadic horse riders spread the use of cannabis to numerous cultures, not only in name and application, but also with the religious and magical connotations that had grown around it. Evidence of this has left its traces in some of the world’s oldest existing religions, and cultures.

Indeed, in 2016 a slew of news articles have come out with Headlines like ‘Founders of Western Civilization Were Prehistoric Dope Dealers (New Scientist) ; ‘Was Marijuana the Original Cash Crop? ‘ (Men’s journal) ; ‘Surprising 5,000-Year-Old Cannabis Trade: Eurasian Steppe Nomads Were Earliest Pot Dealers’ (Ancient Origins) ; all stemming from a multi-authored  academic Paper, Cannabis in Eurasia: origin of human use and Bronze Age trans-continental connections, (Tengwen, Wagner, Demske, Leipe, Tarasov, 2016), that was published in the journal Vegetation History and Archaeobotany* and which detailed the paramount role cannabis played in the trade, tradition, and spread of Indo-European Culture. So the above evidence regarding the role of cannabis in the origins of Western culture should not be underestimated.

The authors of The Encyclopedia of Indo-European Culture note that “Hemp has not only been recovered from sites in Romania but also from a Yamma burial at Gurbanesti (Maldova) where traces were found in a ‘censer’ (a shallow footed bowl believed to have been used in the burning of some aromatic substance). It has been found in a similar context from an early bronze age burial in the north Caucasus…. Ceramics were more elaborate than those of the Yamma culture and included, especially in female burials, low footed vessels interpreted as ‘censers’, presumed to be used in rituals involving some narcotic substance such as hemp” (Mallory, et al., 1997). “It seems, therefore, that the practice of burning cannabis as a narcotic is a tradition which goes back in this area some five or six thousand years and was the focus of the social and religious rituals of the pastoral peoples of central Eurasia in prehistoric and early historic times” (Sherratt, 1995).“These ‘censers’ often highly decorated with ‘sunburst’ motifs, are widespread across the steppe region in the third millennium b.c. (extending at least from the Dnieper to the Yenisei) and may be part of a ritual complex. The censers also diffuse westward at this time in Romania, Hungary and further along the Danube” (Mallory, et al., 1997).

Clearly, humanity has had a natural, indigenous relationship with this plants, that extends back thousands of years, and the rich history of various culture’s relationship with this magical, healing herb, is something that we will be exploring further, in future articles….. For more on cannabis in the ancient world, Check out Chris Bennett’s book Cannabis and the Soma Solution .

Sagan, Carl, The Dragons of Eden: Speculations on the Evolution of Human Intelligence, (Random House, NY, 1977)